The Sir Brian Bell Foundation created a unique opportunity for people to be able to support charities across Papua New Guinea during November and December 2017. The ‘Christmas wishing tree’ program was launched on 9 November 2017 to raise funds for seven charities in PNG. 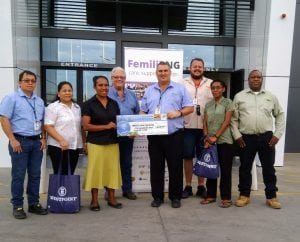 In Lae, Brian Bell Group’s four divisions, Brian Bell Homecentres, Trade Electrical, Chemicals and Agriculture/Kubota had Christmas trees in their respective stores where customers could purchase baubles, place their own messages on the back, and hang it on the Christmas trees.

Brian Bell Homecentre Lae Branch Manager Mr. Tony Incoll said, ‘’We were extremely happy with the commitment our customers had during the promotion, which raised in excess of K4,515. In addition to this, the Sir Brian Bell Foundation donated an additional K20,000 to each of the charities.’’

On behalf of the Board, management, and staff of Femili PNG, Operations Manager Ms. Denga Ilave expressed her utmost thanks for the donation as she received the celebration cheque of K24,515 from Mr. Incoll (Wednesday 31 January 2018) at the Brian Bell Homecentre Lae. She said, ‘’This donation will really help us to continue our services to the survivors and also help us to support our partners who assist survivors of family and sexual violence.’’ 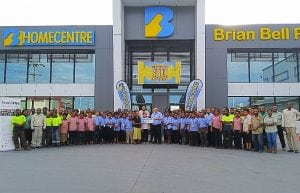 Femili PNG highly appreciates and thanks the Brian Bell Group Lae and the Sir Brian Bell Foundation for this initiative and donation. The organisation is also very grateful to those who purchased baubles at the Brian Bell outlets in Lae, for their generous donation. This initiative demonstrates the continued support from companies and businesses towards assisting survivors of family and sexual violence in PNG.

Mr. Mackellar commented, “While I was unable to attend the event in Lae, we could not be more excited by the outcome and results of our Christmas Wish Tree. It was all about giving, sharing and family. I was amazed by the generosity of so many people over the Christmas period, it was simply great to see so many people getting behind this great initiative. We will continue to build upon this great start, and we will 100% be continuing our Christmas Wish Tree program into 2018.’’