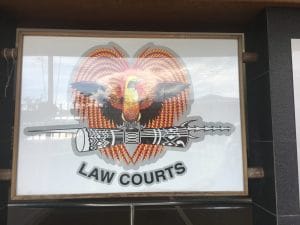 When sentencing the prisoner, Justice Joe Yagi said, he found the offences so aggravating that the offender deserved a more severe penalty.

In early 2009, *Ruthy, who was about six years old at that time went to the Awagasi market with her mother to sell betelnuts and cigarettes which is a routine activity for the family to earn some income to sustain their livelihood in the city of Lae. Ruthy was upset when her mother did not buy her ice cream so she went a little further from where her mother was doing their sales.  She was tricked by the man who pretended to be her uncle.  The man lured her with sweets at the Awagasi market in Lae and took her to the Highlands bus stop at Eriku where he again lied to her that they would go on a short bus trip and then return to her mother. Ruthy, only six years old, believed himand didn’t know that this stranger was going to take her to another province. He took her to Goroka in the Eastern Highlands Province.

The man took Ruthy to his village where he held her captive. He also raped her continuously, which had led to arguments between him and his wife. Because of the arguments, the prisoner’s sister took Ruthy and sold her to another family for K200.00. Ruthy was then treated as a ‘’hausmeri’’ (housemaid) for five years. During this time, she was also used to care for another child with physical disabilities.

During the period that Ruthy was abducted and held captive in Goroka, her father used every means possible to search for his daughter. He placed a missing person’s report at the police station in Lae and also went to other provinces in the Highlands, including Madang and Sepik, but his search was unsuccessful. Ruthy’s father also went on radio both in Lae and Goroka with the help of Morobe FM.

In October 2014, Ruthy managed to escape back to Lae and searched for her family with the help of another woman in the prisoner’s village. At the time she managed to escape from her kidnapper, she was eleven years old. Ruthy sought assistance from the other woman who gave her directions to Awagasi Market in Lae. From Awagasi market, she was able to find her way home and met up with her father and was finally reunited with her family.  Ruthy received medical treatment at the Family Support Centre (FSC) at Angau Memorial Hospital on 20th October 2014, and then was referred to Femili PNG on 11th November 2014.

Femili PNG was newly established at that time and had just begun its operations in Lae. After Ruthy’s intake as a client of Femili PNG, her case was reported to the Lae Sexual Offense Squad (SOS) at the Lae Central Police Station. Unfortunately, the Lae SOS couldn’t assist because the abuse occurred in Goroka, and this was out of their jurisdiction. The Lae Criminal Investigation Division (CID) registered the case for abduction, but the rape case was referred to the Goroka SOS as the incident occurred in Goroka.

There were a lot of challenges faced at the initial stage when Femili PNG had to conduct teleconferences and case conferences with partners in Lae, Goroka and even Australia to ensure that Ruthy’s case was given the priority it deserved and appropriate legal advice. This was because of issues such as the location of Ruthy’s parents, for instance her father was a resident of Lae and her mother was living in her village in the Southern Highlands Province, so the travel and accommodation costs associated with her parents seeing detectives in Goroka were covered by Femili PNG.

There was an instance where Ruthy’s file went missing and Femili PNG had to literally collect each witness’s statement again, compile the file and send the file through Express Air Carrier to Goroka SOS.

After the case was formally handed to Goroka SOS in October 2015, the police attempted to arrest the man but couldn’t locate him. On 24th August 2016, he was finally arrested and the case went through the committal process at the Goroka District Court in September 2016. The man was remanded in custody until his matter was committed to the National Court in Goroka on the 16th of February 2017. The trial was scheduled for November 2017, but due to the court vacation period, it was rescheduled to the 6th and 7th of March 2018.

Two weeks before the trial date in Goroka, Femili PNG’s Child Protection Officer (CPO) coordinated with partners in Lae and Goroka to provide the necessary support to Ruthy and her family, such as the accommodation and travel expenses from Lae to Goroka and back.  This made it possible for all crucial state witnesses to be on the ground in Goroka when the matter was called for trial to commence.

Ruthy’s father expressed his deepest gratitude for the assistance that Femili PNG provided him and his daughter since 2014 when she was taken in as a client. He said, ‘’there were delays along the way, and the process in getting justice seemed too long which caused me to have doubts on whether the case would go through to court.’’ He said that even though it took years, he was very happy that a local NGO such as Femili PNG existed at the time to support him in getting justice for his daughter. ‘’I felt that I had the support I needed. Femili PNG really supported me like a family, and this gave me the strength to pursue the case. I firmly believe that had it not been for Femili PNG, this case would not have been pursued through to the end.’’ he added.

He concluded that most times a lot of people give up along the way because of the delays, and don’t get the justice they deserve. He said, ‘’regardless of how long it may take, or the challenges that will cause you to have doubts and give up, don’t give up, pursue justice until you get it.’’ He wanted to encourage people to never give up in pursuing justice, and for service providers and NGOs to continue and work closely together so that positive outcomes can be achieved.

With effective coordination between Femili PNG and partners such as the Family Support Centre (FSC) at ANGAU Memorial Hospital, Welfare Offices of Goroka and Lae, Goroka SOS, Goroka District and National Courts, Public Prosecutor’s Goroka Office, Kafe Women’s Association, justice was received for the girl who went through this horrific ordeal at a very young age.

Ruthy is now safe with her family, who are very supportive to her. Her disappearance had cost the marriage of her parents and they are currently living separately. However, they are both providing the support that she needs. Ruthy is now living with her paternal relatives.

Although the Ruthy’s trauma is still triggered from time to time, she has displayed incredible strength in overcoming her experience. She has rebuilt her self-esteem and is determined to complete her education. In fact, in 2017 she achieved a dux award from her school.

Note: *name has been changed to protect the identity of the child.