*Sheila is a single mother from the highlands of Papua New Guinea. Her husband had left her to remarry another woman. 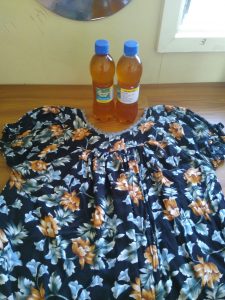 It was very tough being a single parent. Sheila needed support for her children, so she went to the Welfare to seek assistance. The Welfare assisted her with a maintenance summons, which led to the ex-husband being given a court order to pay maintenance for their children.

Sheila didn’t know what to do, as she was also being wrongfully accused and heard that her ex-husband and the police were after her. In the midst of her problems, she heard about Femili PNG from a stranger who she sat next to in the bus. From there, she learnt about the location of Femili PNG office and made her way there to get help.

A Femili PNG case worker took Sheila in as a client. The case worker quickly assisted her to seek legal advice from Femili PNG’s In-house Lawyer as a permanent protection order was raised against her in the attempt for her ex-husband to stop providing maintenance.

With the help of Femili PNG’s In-house Lawyer, the court’s decision was in favor of Sheila (defendant). However, regardless of the court’s decision being made, Sheila’s ex-husband and his current wife arranged with the police and Sheila was wrongfully arrested and detained.

After being bailed out for K400.00, Sheila wanted to know the reason for her arrest, and discovered from the magistrate that her ex-husband accused her of getting maintenance of children that were not his. Since there was no evidence in arresting Sheila, the court announced that it was an illegal arrest and detention, and the bailed money should be returned.

Sheila really appreciated the timely assistance by Femili PNG, which provided coordination with partners, legal advice and informative counselling so that she could make decisions for herself.

It was identified that Sheila always wanted to make noni oil and soap, but didn’t have enough money to start. She was really happy when Femili PNG supported her with 2 dishes, soap cases, cups and a plastic jug to help start her small business.

With the support given, she now has been making and selling noni oil and soap, and has also moved on to sewing and selling ’meri blouse’. She is now able to sustain herself and support her children.

Sheila said, ‘’I praise God that I came to Femili PNG and that was when I was enabled to support myself and my children.’’ She said that she was a business minded person, but she just didn’t have the support to start.

She added, ‘’thank you Femili PNG who help a lot of mothers, and I am one of them.’‘ She continued that she is now strengthened. ‘’Your support is not a waste, it has impacted me personally.’’

Sheila is empowered and looks forward to growing her small business so she can continue to support her family.

*name has been changed to protect identity of client.